Low Impact Development (LID) is a strategy that came out of the late 1990s as a means of managing stormwater with a lesser impact on the natural environment. (See the LID Manual published by SEMCOG in 2005). It’s goal is to prevent impairment to water quality and to local aquatic ecosystems. It focuses on choices at the site-specific level. For example, if a developer must account for X gallons of stormwater runoff from a building in drainage capacity, the developer can choose cement catch basins, pipes and detention ponds or infiltration devices. If a city wants to redevelop a street, it can build gutters and drains along the street, or it can use a pervious paving material along the edges and forgo the drains. Many of these features are visible throughout Washtenaw County.

The implementation of LID as infrastructure is similar to paving a single road from one town to the next. The road serves an important purpose and has benefits associated with it, but it could capture additional social goods if the planning was broader in scope. 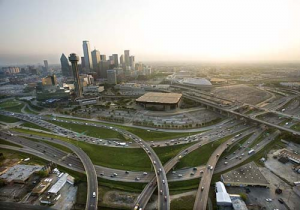 Green infrastructure is that larger planning scope. GI is more like constructing an expressway system around a city. With an expressway system, costs and benefits are measured at the community-wide level, both direct and indirect benefits are counted as real benefits, and strategic planning is undertaken to ensure that roads are put in sensible locations where their value to the community will be maximized. This kind of infrastructure requires inter-jurisdictional communication and planning, the securing of steady funding streams, and a means for measuring progress toward community-wide goals.

GI in Other Cities and Counties

This kind of strategic approach to managing stormwater through LID features is being undertaken by cities across the United States:

Both of these mid-latitude cities have a similar climate to Washtenaw County. They have each instituted a pilot Green Infrastructure Portfolio Standard (GIPS) in partnership with the Center for Neighborhood Technology, American Rivers, and the Great Lakes and St. Lawrence Cities Initiative. Based on the concept of the Renewable Energy Portfolio Standard, the GIPS frames the community’s goals in these terms: “X% increase in stormwater retention through LID features each year for Y years.” The focus is on retrofits since implementation through new development occurs at too slow of a pace to make meaningful progress.

The process involves the formation of a Task Force comprised of the relevant agencies and organizations to define priority areas. Baseline runoff volume is measured for the priority areas and annual goals are set. The most cost-effective LID projects are selected and implemented according to annual goals. Strategic monitoring measures progress and the results direct future plans.

Another city with a climate similar to Washtenaw County, Toledo is experimenting with a Green Streets initiative as a community revitalization strategy. Toledo, which has been an automotive supplier to the Detroit auto industry for decades, has experienced the same economic decline as Detroit, leading to brownfields, vacant properties, crumbling infrastructure and budgetary challenges. GI is being used as a cost-effective method for meeting Clean Water Act obligations.

Sometimes in US cities, GI is used as a popular, green, aesthetically-pleasing alternative to brick and mortar; in Toledo, the Maywood Avenue retrofit green street was done in a flood-prone inner-city neighborhood with an annual household income of $25,000, 1/12 acre lots, and 25% home-ownership. That is to say, the project was not done to be trendy, it was practical, and it has been championed as such by the US EPA. The combination of community revitalization and GI has led to unique and varied sources of funding.

Syracuse (also with a similar climate to Washtenaw County), is the first city in the US permitted to solve their combined sewer overflow (CSO) problem through the use of GI in their “Save the Rain” program (see NRDC’s case study or EPA’s blog posting). The program follows ten years of grey projects, totaling $300 million, to upgrade treatment plants and separate combined sewers. The city has been aggressive in planning, funding, and training.

In 2012, they implemented nearly 45 projects, and from 2010 – 2011, they implemented nearly 75 projects. Residents in target areas can receive free rain barrels. The city provides training on maintenance for GI, overcoming a significant common barrier. Partnerships abound throughout the projects–between city, suburbs, private residents, businesses, universities, and non-profits–and a significant amount of information, including annotated case studies, is provided online to help participants. Their Green Improvement Fund (GIF) is granting $3.1 million to projects on private property, totaling nearly 11 million gallons of stormwater capture in 28 projects. Twenty one million dollars is funding 100 projects, which will capture 110 million gallons annually.

They have won awards and recognition and have broken records with their GI features. For example, in 2011, they were one of ten US communities recognized by the EPA as a “GI Partner,” they have been recognized nationally by the White House’s Council of Environmental Quality, they installed one of the largest green roofs in the Northeast (which is also the site of ground-breaking green roof monitoring by Syracuse University), and their local minor league hockey team plays on frozen rainwater from the rink’s roof.

All of these communities have moved beyond LID to GI by thinking broadly and creatively, by facilitating inter-jurisdictional communication and planning, and by leveraging the true cost-effectiveness of GI for managing stormwater. In the mean time, they have been part of educating the nation on more sustainable stormwater management, have been recognized nationally for implementing common-sense solutions, and have unearthed the funds to make it happen through partnerships and the integration of community values and priorities.

Washtenaw County, which has also been recognized nationally for some LID features, can be the next Midwestern county to implement LID features through Green Infrastructure. This can only happen if the barriers to GI in the county are overcome. HRWC is working with many local partners to support GI and GI projects. Take a look at the resources we have compiled.