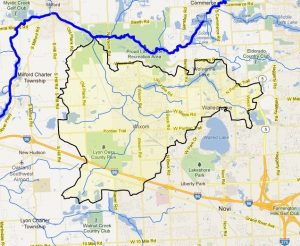 The Norton creekshed is located in the southwest corner of Oakland County. The county government, portions of Commerce, Lyon, and Milford Townships, the cities of Novi, Walled Lake, Wixom, and the Village of Wolverine Lake are all major decision makers and landowners in the creekshed. The Creek is also greatly influenced by the residential landowners of the area.

Norton Creek has 110 miles of branching stream channels, and it drains 24 square miles of land. From the highest headwater to the mouth, the creek’s elevation drops 115 feet. The average slope is 17.5 feet per mile, which is on par for the Huron River as a whole (about the same as Fleming Creek). There are 8 lakes (lakes greater than 10 acres) in the Norton creekshed. The biggest, Wolverine Lake, is 286 acres. The creekshed holds 61 ponds (lakes less than 10 acres).

Wolverine Lake is a major feature in the Norton creekshed. It was created in the 1920s through a private damming and inundation project that raised the water level eight feet and united six small lakes and several marshes. 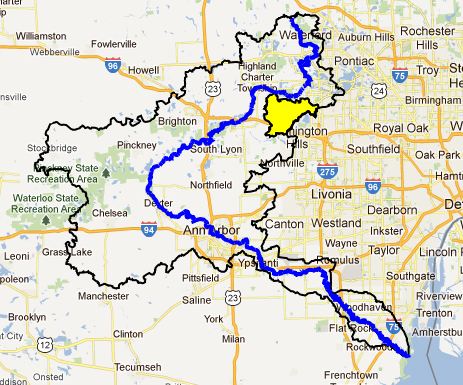