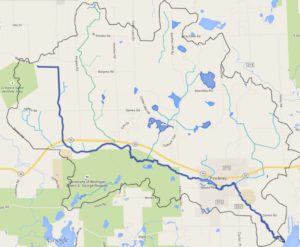 Honey Creek cuts its way through a glacial moraine and a valley of gravel and sandy soils. The pre-settlement land draining to Honey Creek was covered by a mosaic of white and black oak forests and grassy oak barren ecosystems on the uplands, with large tamarack swamps and wet prairies growing in low areas. The creekshed was an agricultural region in the 1800’s, centered around the Village of Pinckney. By 1836, an earthern dam was built on Honey Creek that created Mill Pond and a millrace. By the mid-20th century, Pinckney had turned into a bedroom community for the larger urban areas of Ann Arbor, Lansing, and Detroit.

Honey Creek is a branching stream with numerous tributaries and lakes.  The main branch of Honey Creek flows for 11 miles, starting in agricultural fields of Unadilla Township, eventually entering Putnam Township, the Pinckney Recreation Area, the Village of Pinckney, and finally ending at Portage Lake and the Huron River. The main branch’s average slope is 6 feet per mile, which is quite flat compared to the other tributaries to the Huron River, but there are particular areas of higher slopes.

There are three main tributaries to Honey Creek.  Hummocky Lick is a small creek that flows through a high quality fen system. HRWC volunteers informally renamed this stream “Hummocky Lick” (reminiscent of streams in Kentucky named “Licks”) to replace the official name, “County Drain #7.” The word Hummocky comes from the fen vegetation, which is composed of grass and sedge bumps on the ground called hummocks. The other two major tributaries are unnamed. The center tributary seen in the map below flows through multiple lakes and wetlands.  There are 13 lakes in the Honey creekshed (open water > 5 acres), and 12 ponds (open water < 5 acres). Most of the lakes and ponds have very natural lakeshores, with few houses built along the edges.