This edition of News to Us shares local news on recovering Osprey populations, increasing entrance fees in our metroparks system and an examination of Livingston County drinking water issues.  At the state level, Michigan is considering banning of plastic microbeads. And in national news, aging dams are making headlines again. 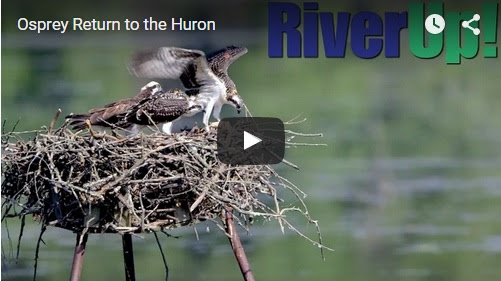 Osprey population booms in Southeast Michigan Osprey populations are rebounding in the Huron River watershed. The Huron River Watershed Council helped install two new platforms for nesting sites in the river. Learn about the bird and its recovery in this article.  See more on HRWC’s role in this mini-documentary.

Microbeads and the Great Lakes We have shared stories about the issue of plastic microbeads from bath and beauty products in previous editions of News to Us.  These beads end up in our lakes and rivers as they are not captured in the wastewater treatment process. Now, the Michigan legislature is considering a ban. Michigan is the last remaining Great Lakes state without a ban.  Here’s hoping we can join the rest of the region in protecting our lakes and streams from this pollutant.

Huron-Clinton parks plan: Higher fees, bigger offices Huron Clinton Metroparks are a significant landholder in the Huron River watershed, much of it along the river itself.  The parks are wonderful amenities for our residents and play a role in protecting water quality and freshwater ecosystems. The park system is considering raising rates for entrance fees.  This article shares more.

Aging And Underfunded: America’s Dam Safety Problem, In 4 Charts  America’s dams are getting old. The nation received a D grade in a recent assessment (Michigan received a D as well). On a day to day basis, this may not be a big deal. But the flooding that occurred in South Carolina last month illustrates why we must be proactive about this issue.  During those floods, more than 20 dams collapsed, dramatically increasing the impact of already damaging rainfall.  Funding is a challenge but preventing a collapse is almost always less expensive than recovering from one.

Safe to drink? Livingston faces own water issues In response to the Flint drinking water crisis, one reporter decided to look into the potential for this kind of disaster in Livingston County.  While the Flint scenario is not a likely one, the article does share the myriad issues that can occur with drinking water and how water suppliers, the county and residents are helping to ensure safe drinking water for everyone.

Posted in Dams, News to Us, Pollution, Uncategorized, Water Quality