Microplastics are prevalent, but mysterious

Plastic is a part of life for 21st century humans. What happens when plastic items begin to break down? Unfortunately, much of it reaches our waterways. Tiny plastic pieces have infiltrated lakes, rivers, and wetlands, and they are often small enough to avoid notice without specialized equipment. Researching the impact of these microplastics on humans and the aquatic environment is becoming a focus of study in the environmental community. HRWC has produced three short educational videos on microplastics, distributed balls and bags to catch microplastics from washing machines, and given an overview of the problem in the Huron River Report, Summer 2017, see Microplastics Pollution in the Huron River. This article is a sequel to the 2017 report.

HRWC wants to stop behavior that contributes to microplastic contamination in our waterways, but furthermore, is interested in the scientific and management side of the problem. In particular, HRWC’s scientific goal is to determine the source of microplastics to stop pollution before it enters our waterways.

Several studies have considered how microplastics are delivered to aquatic systems. Plastic fragments from thin films, foam, and line segments (like from fishing line) enter the system via trash from accidental and purposeful dumping and eventually break down into smaller pieces through physical degradation. Trash is a type of non-point source pollution since it comes from many different places (like sediment and nutrients) and not a single source (like discharge from a wastewater treatment plant).

Microfibers are tricky; their source is not obvious. Since washing machines cause microplastic pieces to slough off of clothing and the wastewater is delivered to municipal facilities, these plants are a seemingly obvious source. Scientific studies, however, have not been able to strongly connect wastewater treatment plants (WWTPs) and microplastics. Baldwin et al. (2016) did not find a statistical relationship between the amount of wastewater effluent and microplastic concentrations. Another study by Carr (2016) reported that nearly all microplastics (including microfibers) were removed from the process at the end of tertiary treatment at one WWTP, while at a second WWTP, plastics were released at a rate of about 1 piece per 1000 liters. This is a very low amount compared to the abundances that HRWC is finding, implying that while WWTPs can be a source, they are not a major contributor.

Microplastics removed by primary and secondary treatment phases end up in wastewater sludge. Dried sludge (biosolids, as it is typically called) is applied to agricultural fields as fertilizer. This is a regular practice in Michigan. Rain can pick up plastics from the biosolids, washing them into creeks and rivers (Nizzetto 2016, Baldwin 2016). Therefore, sludge is another possible source of microplastics; although, this is also not strongly confirmed in the literature.

Baldwin’s 2016 study showed the Huron River is high in microplastic but could only speculate on the source of it. Other scientific studies have contributed to this knowledge base, but the question of microplastic sourcing certainly is not settled. HRWC, operating on a local scale, is interested on finding specific sources so that we can work with government and landowners to shut down or at least alleviate the problem. In 2018, HRWC began to experiment with microplastic monitoring procedures and in 2019 launched its first summer microplastics monitoring program.

In July and August 2019, HRWC filtered 1000 gallons of water and kept the resultant debris from 31 sites at the mouths of Huron watershed streams as well as the river itself. The filtered debris was trapped on gridded filter paper and lightly dried on a hotplate. The samples were kept covered as much as possible to prevent air contamination as microplastics are in dust and fall off clothing. Microplastics on the filter paper were counted under a stereoscope and classified into five different types: fibers, films, beads, foam, and fragments. HRWC also ran several blanks with different sources of drinking and distilled water to understand possible sources of sample contamination.

Of the top ten microplastics sites in the project, six are from the immediate Ann Arbor area, all but one of which (Fleming Creek) are urban streams. Of the other top sites, Norton Creek, and the Huron River in Ypsilanti are also in urban watersheds and South Ore is a highly suburban creek (Brighton).The rest of the sites spread further into Livingston and Oakland counties and generally are more rural or even in natural areas. In every sample, there was at least some plastic. Nowhere is pristine though Horseshoe Creek and Chilson Creek samples had very low counts (2-3 pieces per 1000 gallons).

Microfibers were far and away the most plentiful type of plastic captured, comprising about 97% of the total amount. Fragments, beads, film, and foam were all found, but not consistently. As HRWC does not sample right on the surface of the river but rather 60% from the top of the surface, it makes sense that the samples do not have much foam and film, which are more liable to float. Surely this does affect the result to some unknown degree, but in any case, HRWC findings also match similar studies which show that fibers are the most found microplastic constituent in river environments (Baldwin 2016, Koelmans 2019). They are either the most transportable in streams or there are far more of them out there.

As mentioned previously, research in the scientific literature has not been able to confirm a positive correlation between WWTPs and microplastic abundance. Similarly, the top hotspots for microplastics in this study are not below wastewater treatments plants (exception is the Huron River: Ann Arbor, but even this is a far distance; the closest WWTP would be in Dexter, about 12 miles and two impoundments upstream). The highest plastics counts were in Swift Run, Millers Creek, and Malletts Creek and are not downstream of WWTPs at all, these being very small creeks. It is possible there are illicit washing machine connections to these creeks, but it seems unlikely such connections would be present in high numbers. As mentioned earlier, another possible source of microplastics hypothesized by Nizetto (2016) is biosolids spread on agricultural fields and then escaping in rain runoff. However, our highest-count locations are urban creeks with nearly no agriculture in the watershed and there are agricultural watersheds sampled with hardly any microplastics. The microfibers are also presumably not coming from a standard piece of trash found in the river like food packaging, as this type of trash does not degrade into microfibers but more typically into fragments, foams, and films. Where, then, are the fibers coming from?

Studies by Allen et al. (2019) and Brahney et al. (2020) have shown that microplastics settle out of the air, even in remote mountain watersheds. If fibers are showing up on the tops of mountains, certainly we would expect them to be found in the dirt and dust covering city streets in the summer. Brahney reports that fibers in particular are transportable through the atmosphere. Therefore, it is possible that fibers settle from the air, wash out from rain, and arrive to streams via storm-sewers in urban environments. If atmospheric deposition is to blame, then plastic particles are also setting in forests and fields, but these pieces are more likely to get trapped in soils and less likely to run-off into surface water. In our samples, there is correlation between microplastic pieces and amount of impervious surfaces in the site’s watershed (r= 0.54). The microplastics could be peaking in abundance in our waterways after rain events wash them in, much like sediment and other pollution peaks in rivers after rain events.

To get a better understanding of how rain may have affected our results, we obtained rain data from the City of Ann Arbor’s rain gauge, located on North Campus of the University of Michigan. Unfortunately, these rain/microplastic correlations did not suggest that rain is related to microplastics in the direction that we would anticipate. Actually, the correlations were negative, indicating that higher rainfall is associated with lower microplastic counts, which is the opposite of what we expected. This discrepancy in our expectation versus reality means it is a good avenue to study further. Going back to the same sites several times over the course of a field season and covering all of the sites on the same days will give us a much better understanding of how variable the samples can be in regard to flow conditions and weather. Furthermore, if the samples are highly variable over the course of a summer, this will strengthen the hypothesis that the sourcing of microplastics is non-point rather than point source pollution. WWTPs should produce more stable microplastics numbers as its effluent will be stable over time, except during overflow events.

The 2019 sampling was widespread in order to find hotspots, but we were only able to collect two samples from each location, and thus did not get any indication of the possible sampling variation in our microplastics collection. In 2020, HRWC will sample with more intensity on fewer places to understand how weather, flow, and the natural variability in sampling affects the microplastic counts. This may further elucidate details on their source. Determining the source of microplastics or at least how they are delivered to the Huron River system remains the ultimate goal.

Dennis Kittel, retired plastics engineer and HRWC volunteer led monitoring teams, helped build and test the monitoring procedures, donated much of the equipment for the study, helped find funding, and quite plainly was the initial driving force behind this entire project. Many 2019 HRWC summer interns helped filter and count samples, but Tina Lin and Willow Krupin by far contributed the most hours to the effort. Also thank you to Dr. Melissa Duhaime and Rachel Cable from the University of Michigan who provided HRWC with plentiful technical advice. This work was funded by the Kinley Innovators . 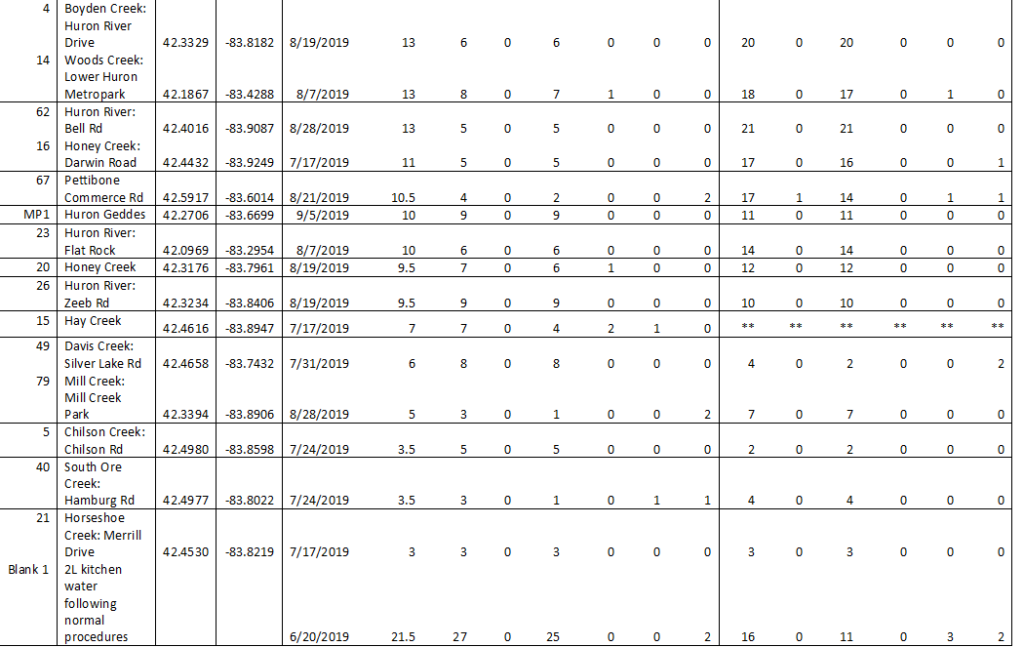 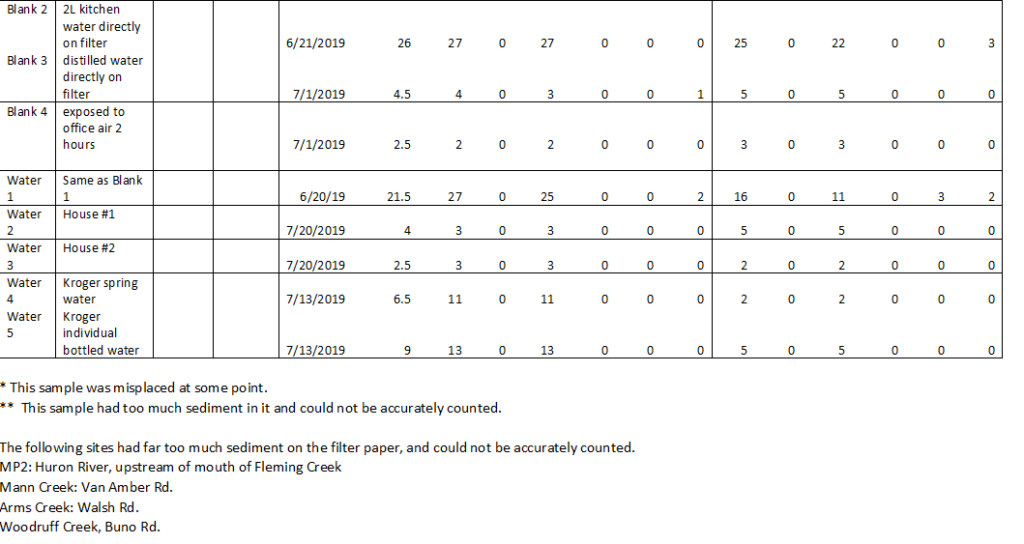