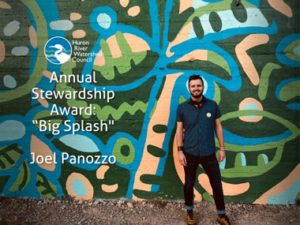 Many in the Ann Arbor area know Joel as the former co-owner of the Lunch Room and Detroit Street Filling Station. Joel and his former business partner Phillis Engelbert brought a strong justice and community ethic to their restaurants (Phillis continues to run both businesses.) Joel has even testified at Capitol Hill in both Lansing and Washington, DC on the topics of fair wages and ending sexual harassment in the food industry.

So, it is no surprise that Joel has been a longtime supporter of HRWC. After a couple of years donating food to Suds on the River, HRWC’s annual fundraiser, Joel became a regular volunteer for the event. Using his restaurant and event planning background, he assisted in the kitchen with then head chef Misty Callies. Joel was delighted to take on the lead position when Misty moved on. “I have catered many weddings and events, but I would say the location of Suds is was makes it truly special. Yes, Suds is a fundraising event for the crucial activities of HRWC, but what kept me coming back is that Suds is a celebration. It’s a celebration of the river itself. The event’s changing location every year would be considered a nightmare for any party planner, but it turned the event into a fresh and true celebration of our community gem.”

When asked recently why Joel got involved in Suds, he noted

I personally have used the Huron River as a place of healing time and time again. I want this gem to be clean and accessible for generations to come.

HRWC staff were heartbroken when we lost one of our family, Andrea Kline, this past year. Andrea, as well as her husband Paul Evanoff, have been HRWC supporters since the early 1990’s. Paul notes that,

“Andrea will be remembered as a person that led a very active personal and professional life.”

She studied and worked on watershed management planning and conservation since the late 1970’s. A professional Landscape Architect, she worked with numerous notable organizations in Southeast Michigan including The Nature Conservancy, Huron Clinton Metropolitan Authority, Friends of the Detroit River, the Stewardship Network, the Detroit River International Wildlife Refuge Alliance, Johnson, Johnson and Roy (now SmithGroup), and Pollack Design Associates.

Andrea’s professional work and love for outdoor recreation brought her to HRWC’s River Roundup and Stonefly Search, where she was a stalwart volunteer, making long-time friendships while supporting HRWC’s work. Andrea went on to play a critical role in HRWC’s RiverUp! program and the development of the Huron River Water Trail. Andrea was often our boots-on-the-ground representative. She coordinated many, often challenging, construction projects that were completed to her high standards of quality. Her works lives on, providing water trail users with safe portages and better access points. Through RiverUp!, Andrea also became an HRWC ambassador, often attending community events to present HRWC projects and educate the public on the importance of the river.

Huron River recreationists will greatly benefit from Andrea’s passionate efforts and accomplishments for years to come.

This blog post was originally published in the Huron River Report, Spring 2021