***  UPDATE: On August 16, 2017, the EPA and the Army extended the comment period by 30 days for the proposed first step of the review of the definition of ‘Waters of the U.S.’ to provide additional time for stakeholders to weigh in. *** The comment period, as now extended, will close on September 27, 2017. ***

While we are working to clean up the Huron River system for a good quality of life, EPA Administrator Scott Pruitt is working to roll back the Clean Water Act. The current administration is rushing through a repeal of the Clean Water Rule and we have only until September 27th during public comment to try and stop it. It’s critical for your voice to be heard in D.C.

The proposal has been published in the federal register.

You can help by submitting a request to stop the repeal of this important rule on or before Wednesday, Sept. 27, 11:59pm EST. 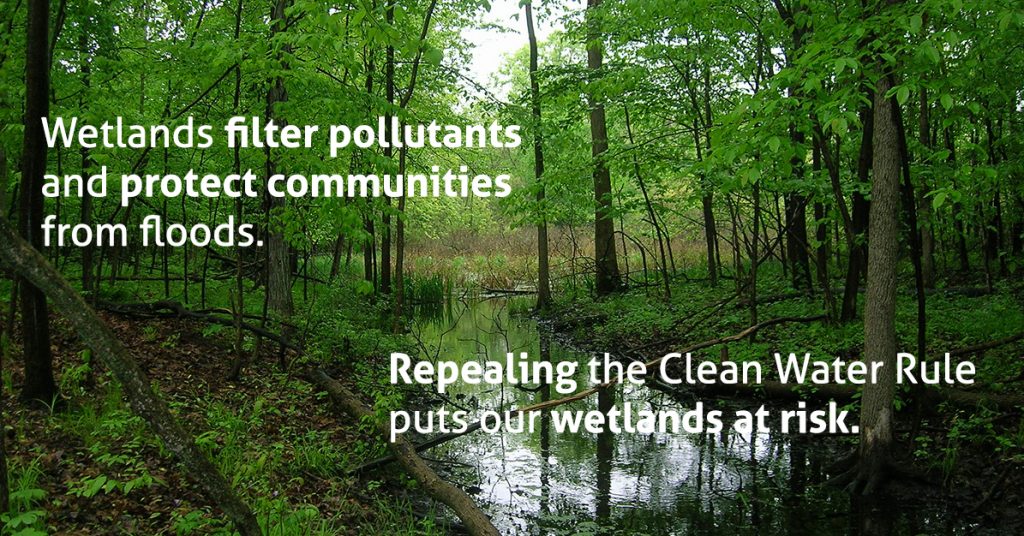 What is the Clean Water Rule? In 2015, the previous administration clarified and finalized protections for streams and wetlands across the country. These safeguards protected the small streams that feed the drinking water sources for nearly 1 in 3 Americans. They protected wetlands throughout the nation that filter pollutants from water, absorb floodwaters, and provide habitat for countless wildlife. In fact, industry and other permittees asked for this clarification as an end to regulatory confusion about which of the country’s waterways the Clean Water Act protects. The rule was supported by millions of Americans.

The Clean Water Rule followed a robust public process. Before finalizing the Clean Water Rule in 2015, EPA held more than 400 meetings with stakeholders across the country and published a synthesis of more than 1,200 peer-reviewed scientific publications, which showed that the small streams and wetlands the Rule safeguards are vital to larger downstream waters.

What is this administration proposing? Administrator Pruitt does not want to implement the Clean Water Rule. Instead, he plans to rush through the repeal of the Clean Water Rule this year, then propose and finalize a less protective rule in less than a year. President Trump signed an Executive Order instructing the EPA to propose a new rule based on former U.S. Supreme Court Justice Scalia’s opinion of which waterways the Clean Water Act protects. A rule following Scalia’s interpretation would result in drastic exclusions of wetlands and streams from protection; fewer than half of wetlands and fewer than 40 percent of streams would receive federal protection. If that scenario comes to pass, then the nation’s waters will be less protected than they were in 1975!

Who is opposing the Clean Water Rule? Lobbyists for oil and gas producers, homebuilders, and farm bureaus.

What’s at stake? Our right to clean drinking water is in jeopardy. Rolling back 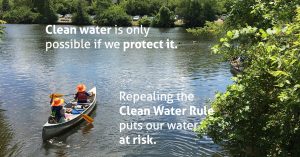 the rule will result in the same regulatory confusion that resulted in broad-based calls for clarity about which of our nation’s waterways the Clean Water Act protects. Rolling back the rule is bad governance, bad for businesses who rely on regulatory certainty, and bad for our communities that deserve clean water.

Michigan’s rivers play a key role in economic and community building. Here in the Huron River watershed, we know the value of a healthy river system that includes healthy wetlands and smaller feeder streams. The river and water trail are conservatively estimated to have the following economic impact:

Please speak up – send a message to the EPA today. Tell Administrator Pruitt: Hands off our water. We’ve provided a sample public comment letter. We encourage you to add your own description of the value of clean water.

Postscript: Republicans, meanwhile, are targeting the rule on a second front. A section of the Defense Department spending bill (page 277, line 12) allows the administration to revoke the rule with no strings attached — strings being requirements for public consultation.