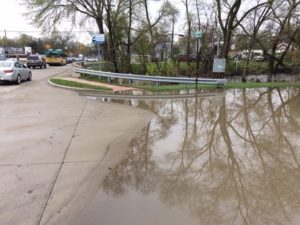 News to Us highlights a couple articles on pollutants, the recent flooding in southeast Michigan, news on trails in our region, and what it means for Michigan to be a climate refuge.

13 federal PFAS bills will get committee hearing on Wednesday
There was a federal hearing last week, by a House of Representatives subcommittee to discuss 13 pending bills addressing PFAS contamination. Two witnesses from Michigan, including Ann Arbor’s Water Treatment Plant Manager, Brian Steglitz, provided testimony.  Three of the thirteen bills were introduced by Michigan legislators. This is an important but early step toward federal action on this issue. Find HRWC resources on PFAS here

Want to Escape Global Warming? These Cities Promise Cool Relief
A growing area of discussion on climate change centers on the movement of people from places that become increasingly inhospitable to safer, less impacted locations. As climate change brings sea level rise, increasing temperatures, fires and hurricanes, people from coastal areas, arid regions and other highly impacted areas will have to or chose to relocate. The Great Lakes region is understood to be a climate refuge – a place where people will relocate to.  How can the region prepare for this immigration?

Wilson foundation finances effort to connect trails in Detroit, Downriver
More funding for trails will bolster trail networks throughout southeast Michigan. Trails are an amazing asset allowing people to get outdoors and enjoy nature. Funded segments will provide connectors from different locations in Detroit and Downriver to the Iron Belle trail that will traverse the entire state when completed.

Gov. Gretchen Whitmer declares state of emergency in Wayne Co. over flooding
In early May, southeast Michigan received a large amount of rainfall over a short period of time.  When this happens stormwater systems and river channels overflow. The Detroit area received enough rain that significant surface flooding occurred affecting homes and closing roads. As a result Gov Whitmer declared a state of emergency to mobile resources to help. Among other impacts, in the Huron there were several sewage overflows and in Saline a roadway washed out.

Bacteria and viruses from human waste getting into Michigan water
Septic systems are failing at alarmingly high rates throughout the state. It is infrastructure underground and therefore often, out of mind. But the price of neglecting these systems is human waste in ground and surface water and all the pathogens that go along with it. It is a significant human health issue.

Posted in News to Us