A unique amenity for users of the Huron River National Water Trail (HRWT) has arrived! Canoe and kayak lockers that secure personal boats, paddles, and life jackets at Bandemer Park.

This prototype, designed and manufactured in Ann Arbor, can accommodate a majority of canoe and kayak sizes as well as stand-up paddleboards. The lockers have six compartments that can fit up to two boats each depending on boat sizes. Each locker is modular so more lockers can be added as demand grows.

By giving paddlers a chance to secure their boats, the lockers offer recreationists entré to the shops and restaurants in the HRWT’s Trail Towns. Ann Arbor, which is one of the Trail Towns, was called a “(Next) Best Paddling Town” by Canoe & Kayak Magazine so it seems fitting that it is the first one to offer this key amenity.

The City of Ann Arbor accepted the lockers as a donation from the Huron River Watershed Council, and its Parks & Recreation Department will manage the lockers beginning this season. The lockers provide a convenient option for residents looking to enjoy paddlesports on the Huron River.

In 2014, I approached Jen Maigret of the Taubman College of Architecture & Urban Planning at the University of Michigan to see if her studio would design canoe and kayak lockers. We had to charter new territory in the field of paddlesport recreation to offer the Trail Towns functional lockers with a design aesthetic appropriate to prized waterfront public spaces.

Jen and her design partner Maria Arquero de Alarcon were a perfect fit for this project because they had already shaped their design studio –MAde Studio – to explore new ways of connecting people with water through design. They enthusiastically took up the challenge. Then followed many months (years, really) of meeting with local parks and recreation professionals, paddlesport aficionados, and fabricators to find a practical, yet appealing design worthy of a riverfront view.

Jen describes their process: “We approached the design of the lockers with two goals in mind. First, the lockers should contribute to a “regional” identity for the Huron River watershed and the significant designation as a National Water Trail. Second, the lockers should also allow for a unique expression of each of the 5 water trail towns to enhance the sense of place in each location.”

Hosford & Co. fabricated the lockers at its location just a few steps away from the Huron River. In May, their crew delivered the first lockers to Ann Arbor’s Bandemer Park. 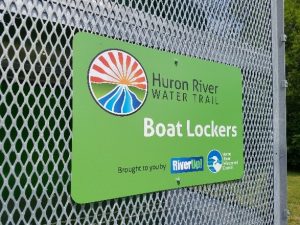 As a Trail Town on the 104-mile Huron River National Water Trail, the City of Ann Arbor offers scenic riverside parks, exciting cascades and placid stillwater trips for trail users. The new lockers are a key amenity that offer safe and sturdy storage for residents with their own boats looking for on-the-water access. HRWC, through the private-public partnership called RiverUp!, is pleased to donate the prototype storage solution for the HRWT Trail Towns with a vision of more lockers from Milford to Dexter, and Ypsilanti to Flat Rock. These other lockers may operate with a different rental option by providing hourly and daily storage options. Plans are currently underway with the other Trail Towns to host and maintain the lockers. 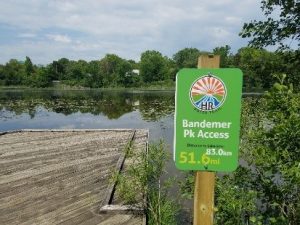 Would you like to see lockers in more places on the Huron River? Contributions to HRWC’s RiverUp! initiative are needed to provide day-use lockers in other riverfront communities.